Parkinson’s disease is a disorder known for its degenerative nature, as it targets the nerve cells in the brain that generate dopamine.

Symptoms of Parkinson’s disease include an altered gait or speech pattern, muscle rigidity, and tremors, clearly marking this condition as one that affects the user’s daily life.

While there is yet no cure for Parkinson’s, there are some ways to treat the symptoms, including medication and physical therapy, while some patients have had success with the use of medical marajuana for reducing tremors and pain.

However, cannabis contains properties that make the user “high” by triggering a rush of euphoria, stimulating appetite, and possibly create a sense of grogginess which the user may not desire.

Luckily, this is where hemp flower for parkinson's disease comes in.

Hemp flower is a plant that’s closely related to cannabis; both carry a unique variety of chemical compounds known as terpenes and cannabinoids, which can alleviate pain, reduce anxiety and improve sleep quality.

The one big difference between these two plants, though, is that hemp lacks a specific type of cannabinoid: THC is the psychoactive component in cannabis that makes the user high, and while hemp flower contains some THC, it’s not enough to create an effect on your state of mind.

Meanwhile, hemp is high in other cannabinoids such as CBD and CBG, not to mention the multitudes of therapeutic terpenes.

Before we go into terpenes and cannabinoids, though, let’s take a look at some of our favorite strains for reducing symptoms of pain, tremors, psychosis and impaired sleep. 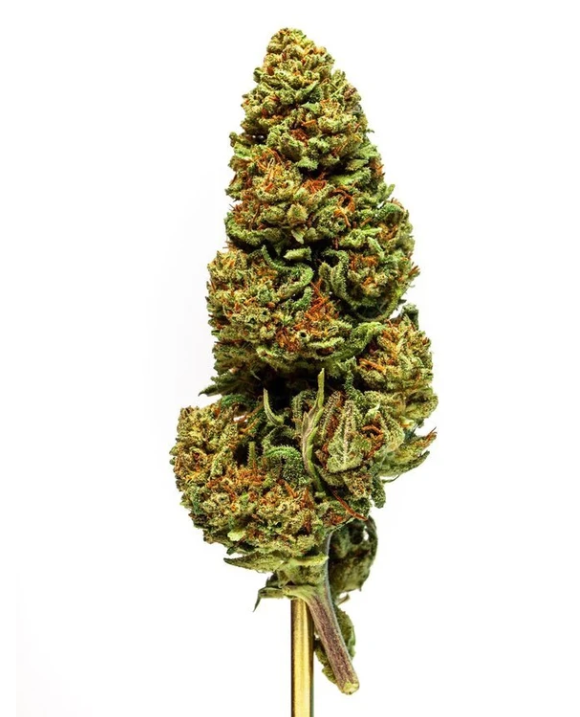 This uplifting strain’s effects can help elevate spirits and combat the depression that often comes with Parkinson’s disease.

This strain was cultivated by 4-Letter Farm with the utmost care and conditions, to create a strain with a level of CBD that’s high but suitable for beginners.

As for terpenes, this strain is dominant in beta myrcene, which is chiefly responsible for the sedative effect that hemp flower is capable of providing.

While there is not quite enough beta myrcene in this strain of hemp flower to knock the user out, it’s certainly enough to provide a soothing, unwinding effect on the muscles.

This strain is also high in beta caryophyllene, which is most frequently researched for it reputed pain killing properties.

For instance, this 2013 study showed that beta caryophyllene can treat chronic pain associated with arthritis by targeting central and peripheral neuropathic pain, as well as inflammation-mediated chronic pain.

This strain creates medium to large nugs, which tend to come in an evergreen tree while presenting leaves in a vivid shade of lime green. The pistils in this strain are golden-brown, which strike a lovely contrast reminiscent of candy apple.

The aroma of these buds is somewhere between herbal and peppery, with subtle notes of mintiness. The effects of this hemp flower leaves the user feeling relaxed and chill, while promoting an upbeat outlook. 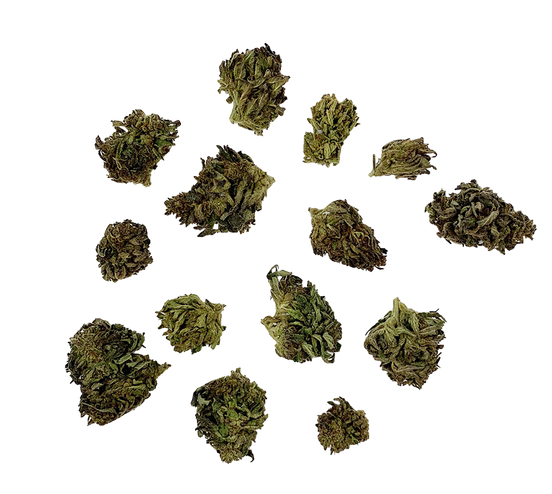 If you already know that you enjoy Suver Haze and Lifter, this is the strain for you. This hybrid is relaxing, and will help ease chronic pain with its terpene profile.

Beta myrcene and beta caryophyllene are two terpenes known for their abilities to relieve inflammation and anxiety, but they’re not alone.

Another therapeutic terpene found in this strain is phytol, which provides green tea with its renown antioxidant properties. Antioxidants are helpful in that they protect the body tissue from free radicals, which are unstable hydrogen atoms that can age your skin faster.

Phytol is also ideal in a strain of hemp flower for Parkinson’s disease because it can inhibit the inflammatory response in the brain, as shown by this 2013 study.

Additionally, this strain is high in guaiol, which is found especially in cypress trees. Guaiol is still a fairly mysterious terpene, although some research shows that it poses antimicrobial properties, which can help enforce the immune system.

This strain gives off medium-size buds in shades of emerald green, along with a generous plumage of purple flowers, and features red and brown pistils and cream-colored trichomes.

When left open, you mostly get an aroma of musty, sweet earth and plant matter, but once these nugs are ground up, they exude an aroma of sweet, pungent tropical fruit.

Divine Goddess is one of Dr. Ganja’s newest strains, and if you’re familiar with their products, this is a new one to try.

This strain contains all of the “staple” terpenes for inflammation, including beta-myrcene, beta-caryophyllene and beta-pinene. Plus, it contains other terpenes like beta-farnesene, which can promote colon health while preventing muscle spasms.

As for beta-caryophyllene, this terpene is well known for its effects on pain.

Over the last decade, caryophyllene has gained the attention of scientists when it was discovered to be one of the first non-cannabinoids to directly activate cannabinoid receptors. Caryophyllene-rich cannabis strains may therefore have specific medicinal effects due to this terpene’s effect on our endocannabinoid system.

Hybrid strains such as this one are ideal for those with Parkinson’s because they can be taken any time during the day or evening. Of course, if you have some before bed, it’s the ideal nightcap, producing a gentle euphoria, which is then followed by a mild wave of sedation.

Meanwhile, if you take it in the morning, it’ll give a headrush of energy likened to a caffeine buzz, which can help stimulate creativity and productivity. Because of this, Divine Goddess is the perfect “anytime” strain.

Divine Goddess produces flowers that are dark in both smell and appearance, featuring a dense, tightly-packed texture that bears an aromatic sandalwood scent when broken into. When inhaled, the pleasant cedar and grass flavor really comes through.

While users can use this hemp flower however they please, Dr. Ganja especially recommends that you vape it to get the most of the cedar and sweet grass flavor. 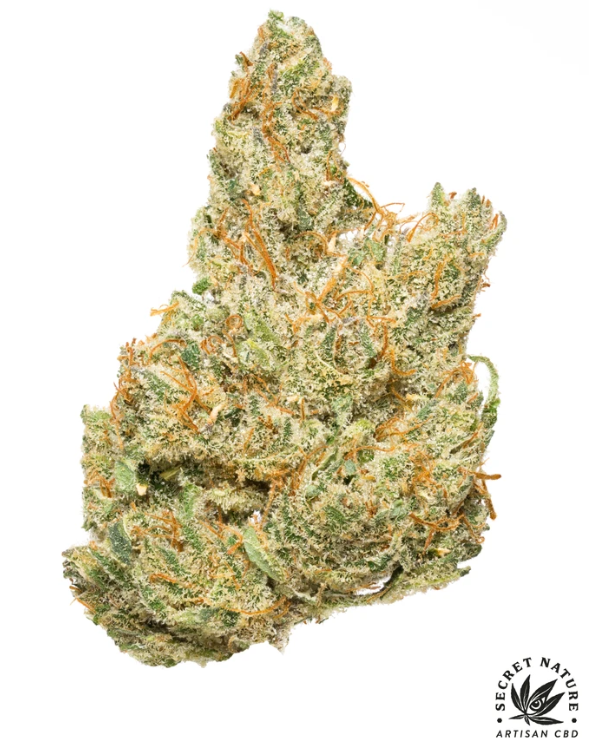 This juicy sativa is like a mini tropical getaway, and is sure to ease tension and help reduce the occurrence of tremors.

That being said, this strain won’t get you drowsy either; instead, it provides both a calming sensation while uplifting your mood and raising energy levels.

This behavior in Papaya Nights is partly due to the effects of the terpene limonene.

When it comes to aroma, limonene is a favorite due to the way it exudes a delectable flavor of lemon and diesel. Plus, it’s a great mood booster. This 2014 study, for instance, shows that limonene has all the capability to ease stress and anxiety. Plus, it’s another terpene that is great for inflammatory pain.

This strain of hemp flower also contains .033% alpha humulene, which is both a powerful anti-inflammatory and analgesic agent, but also provides strains of hemp flower with a hoppy, malty aroma.

This strain creates pleasing, plump little nugs, whose leaves bear a bright lime green, which is typical with sativa dominant strains. The aroma that comes off of these hemp flower buds is that of ripe tropical fruit, diesel, and astringent berry.

Secret Nature CBD offers discreet packaging, and orders are hermetically sealed before shipping, so you won’t have to worry about the scent coming through.

Papaya Nights is smokeable for any time of day, and is ideal for relieving painful symptoms so that you can focus on what’s important.

At 24% CBD, Suzy Q is one of Mr. Hemp Flower’s high-CBD favorites! It goes without saying, then, that this strain is incredibly relaxing, and is recommended especially for the use of relieving insomnia, anxiety and pain, making it prime territory for Parkinson's disease symptoms.

One of the more abundant terpenes in this strain is alpha-pinene at .05%, which is not only a powerful anti-inflammatory agent, but also works as a broad-spectrum antibiotic.

Plus, alpha-pinene makes a strain especially great for those who find themselves to be heavily sensitive to even the slightest amount of THC, since alpha-pinene can help counteract the anxiety sometimes caused by it.

Of course, this strain is also high in beta myrcene, which always makes a notable appearance.

A limited number of rodent studies have suggested that Beta-Myrcene, given at high doses, may have muscle relaxant effects. The same study also showed that Beta-Myrcene can increase the amount of time mice spent asleep, but only when given in combination with narcotics with strong sedative effects.

However, animal studies often do not translate to humans, so more research is needed before we will have a clear indication of whether Beta-Myrcene can produce sedative effects, especially at the levels it is commonly found in commercial cannabis products.

Additionally, Suzy Q is also high in limonene and linalool, which, among other functions, are notoriously known for soothing the muscles while relieving tension.

Finally, Suzy Q is especially high in beta-myrcene, which, at .26%, renders this strain as sativa dominant. This terpene characteristic signifies that the strain won’t make the user drowsy, but will certainly provide relaxing effects. That being said, you should have no problem sleeping if you take this hemp flower in the evening.

Suzy Q produces buds which present an earthy shade of green, with an even distribution of amber-colored tendrils. When smoked or vaped, this nug gives off a light, piney aroma, which is a great pre-bedtime treat.

CBD and THC are part of the same family: cannabinoids.

Cannabinoids are a group of unique organic compounds that can have a great impact on our nervous systems; when they enter the human body, they interact with a series of receptors throughout the body known as the endocannabinoid system (ECS).

In the European Journal of Pain, for instance, one study using an animal model showed that CBD can help to manage pain caused by arthritis. One report also observed that short-term use of CBD can reduce muscle spasms, while additionally relieving tension and soreness.

Meanwhile, this study shows evidence that CBD can treat Parkinson’s disease symptoms by targeting CPR6 receptors in the base ganglia of the brain.

While many hemp flower strains contain some THC, it is not enough to create any sort of significant effect, although even a trace amount helps create the synergistic connection between all parts of the hemp flower, creating the entourage effect. This effect is said to make hemp flower all the more effective in delivering its therapeutic effects.

Terpenes are compounds found in plant matter, and are known for giving herbs an aromatic quality.

It’s still generally unknown how terpenes perform their functions in the human body, but some express behaviors similar to that of cannabinoids.

Plus, terpenes make up a big component in the entourage effect, and they provide your hemp flower with flavor, so you should always make sure that your hemp strain contains at least .8% terpenes.

Parkinson’s disease can make a big impact on your daily life and overall health, but hemp flower and prescribed treatment may win you back some control by reducing inflammation, calming tremors, and improving state of mind.

How can hemp flower help my Parkinson’s disease?

It should be known that there is yet to be an official medication for Parkinson’s disease involving hemp flower. However, it is possible that when used in tandem with prescribed medical treatment, hemp flower may be able to help alleviate symptoms.

Will hemp flower get me high?

Hemp flower will not get the user high, as it legally cannot contain more than .3% THC. However, hemp flower can provide a wealth of other benefits, including uplifted mood, pain relief, and a better night’s sleep.