For those who wish to either take a break or simply quit altogether, withdrawal symptoms are mild, but can nonetheless be irritating; in many ways, it’s quite similar to caffeine withdrawal. Luckily, many people have found that using hemp flower quitting weed to be very beneficial.

n individual may sometimes have a motivation to give up or cut back on their cannabis consumption, whether it be:

For those who wish to either take a break or simply quit altogether, withdrawal symptoms are mild, but can nonetheless be irritating; in many ways, it’s quite similar to caffeine withdrawal.

Symptoms of cannabis withdrawal include feelings of anger or irritability, anxiety, depression, feelings of restlessness and impaired sleep.

One can quit cannabis by ensuring a support system, making a plan, and avoid things that trigger the urge to smoke, and you may find more success with the accompanying use of hemp flower.

Hemp flower possesses all of the beneficial cannabinoids and terpenes as cannabis, but with one exception: hemp flower doesn’t contain THC.

THC is the cannabinoid that triggers the mind-altering psychoactive effect that cannabis is associated with, so for many individuals, it’s a desirable alternative to use hemp flower for quitting weed. 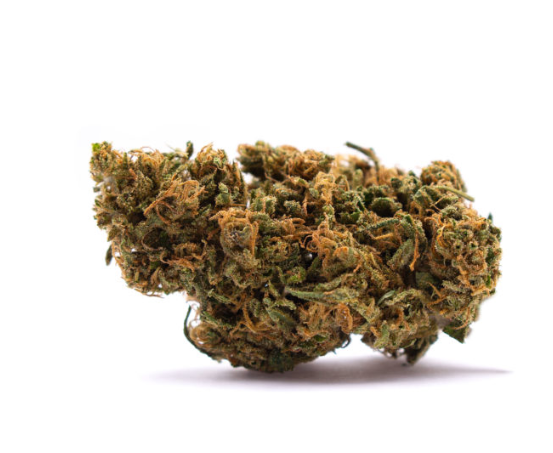 Baox is the perfect strain for individuals who have used weed to help them fall asleep.

Named after Rocky Bal-Baox himself, this sleep-promoting strain will knock you out in the late rounds, and presents a balanced, yet intense terpene profile, though its dominant terpenes tend to be heavily associated with inflammation and tension.

This also couples well with limonene, which is great for relieving stress-related symptoms, as research has shown that whether inhaled or orally ingested, limonene can reduce symptoms of stress, depression and anxiety, as well as such similar symptoms found in obsessive compulsive disorder (OCD).

There is also linalool, which is known for its sedative effects that are both pain-relieving as well as relaxing.

This relaxing effect can occur because linalool raises the levels of adenosine in the body, which is often blocked by stimulants or stress.

Mr. Hemp Flower partnered with a local Asheville, NC farmer to grow this strain outdoors, and under the most nurturing care, Baox has grown to produce light, crispy buds with a very slight cone shape, highlighted with vibrant streaks of amber.

Mr. Hemp Flower makes some of the most CBD-concentrated products in the market, and at over 18%, Baox is no exception. 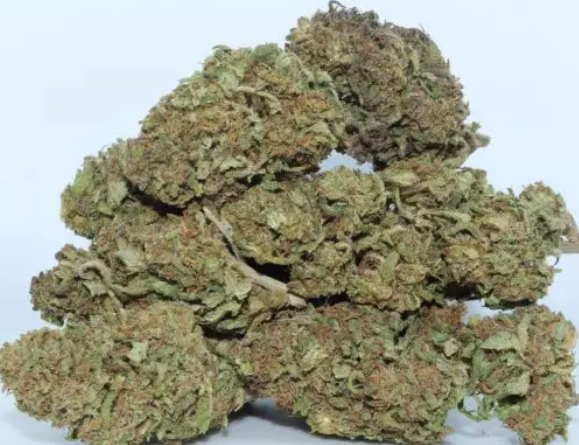 Lifter is known for its energizing, yet calming properties, and this is largely thanks to the wealth of cannabinoids these flowers contain.

Lifter is one of Dr. Ganja’s most CBD-rich strains; plus it’s rich in the cannabinoids CBCA and CBGA, which help to amplify the overall benefits of hemp flower.

This strain is true to its name in that it’s known to uplift the spirits and wash away fatigue. Both skunky yet sweet, this strain will be especially familiar to those who’ve grown accustomed to smoking weed. Lifter is quite similar to its parent strains Suver Haze #50 and Early Resin Berry.

This strain features buds on the longer side, but their constitution is still dense and frosty, adorned with crystalline trichomes. Thanks to the levels CBG, as well as THCA, which stands for tetrahydrocannabinolic acid, contribute to this strain’s energizing effects, making it as refreshing and rejuvenating as a fresh cup of coffee.

Lifter is perfect for someone who wishes to ease tension before getting back to their daily tasks while better managing stress. 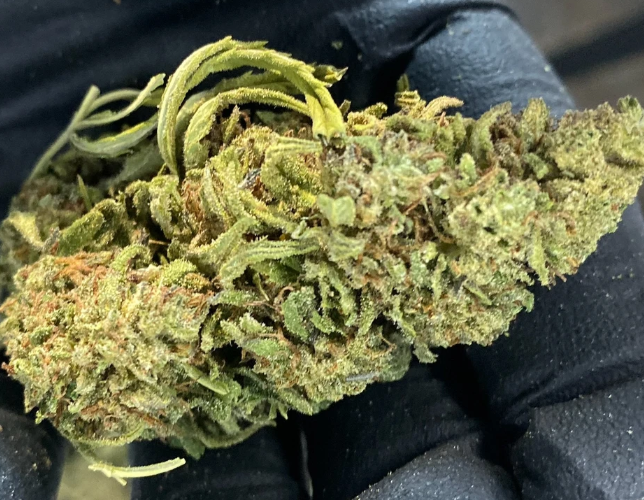 This indica hybrid is perfect for those who are most accustomed to Cherry strains, and will enjoy the way it encourages relaxation in the user.

Beta myrcene is one of the most abundant terpenes in Cherry Soda, which works as a potent sleep aid.

Additionally, it is known for its analgesic and anti-inflammatory effects, which can further assist those quitting cannabis by easing headaches and muscle tension.

Geranyle acetate is another abundant terpene in this strain, which may surprise a few, while perhaps noticing the floral, fruity scent.

Cherry Soda is also high in neryl acetate, which is useful not only for relieving inflammation, but also for its potential anti-aging properties, and this can be an enjoyable side benefit whenever quitting any habit.

The density of these buds ranges from medium to high, but the large size of them is surprisingly consistent with each flower.

The shade of green in this strain is unusually bright for an indica, with pistils bearing an almost identical shade of sage green, with a mild sprinkling of trichomes.

When left unbroken, the smell profile of this strain is slightly sweet, but reveals pinched, gassy notes when these nugs are broken down. 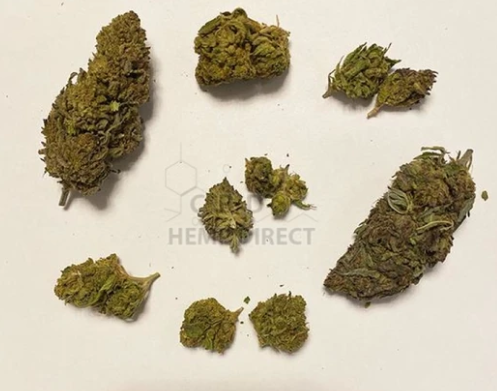 Casino Cookie is another one of CBD Hemp Direct’s newest exclusive strains, and it just finished its second season.

This crop cultivated in Las Vegas is a strain on the sativa side, with a 20.7% CBD potency as well as astonishing 6 MG of beta-caryophyllene (average 1-3 MG) and less than 0.3% total potential THC. As an especially CBD-dominant strain, this is sure to leave a relaxing, stress-relieving effect.

This strain also contains large amounts of bisabolol, which is known for its anti-inflammatory and antimicrobial benefits. Not to mention that it has a slight tranquilizing quality; if you have ever sipped chamomile tea and felt its calming effects, you have bisabolol to thank, as this delicate tea is known to carry high quantities of this terpene. Besides myrcene and beta caryophyllene, Casino Cookies is also high in humulene.

Humulene is unique from other terpenes in that it can suppress appetite. On top of that, though, it’s also been shown in this study that both beta-caryophyllene and humulene can potentially perform as effectively as steroid alternatives against inflammation.

Casino Cookie produces hemp flower nugs that vary in sizes from small to large, but the shape makes them look like tiny evergreen trees. The aroma produced is earthy, dank and musky, and is sure to get you into relaxation mode pronto. 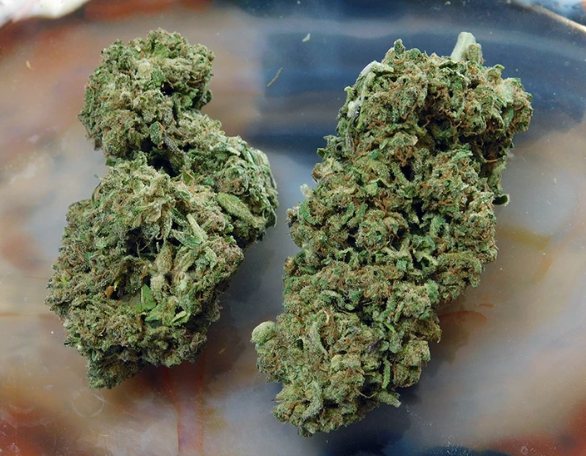 This indica dominant hybrid is ideal for those who need an after-work treat for unwinding.

This strain is particularly high in beta ocimene, which can enable hemp flower to exude a lush, forest-like effect. Ocimene presents anti-inflammatory properties and anti-oxidative properties as well, which can help protect your body’s tissues from damage and potential wear and tear.

Suver Haze is also high in beta caryophyllene, which works to both relieve full-body pain, as shown in this study, while acting as a neuroprotectant. The latter is demonstrated by this article, which indicates that these properties have a strong through the CB2 receptors.

This classic pain-relieving strain is also abundant in alpha pinene, which is known for its extraordinary coniferous scent, and is found in plants like pine and rosemary.

Alpha pinene has been shown by recent research to help modulate the inflammatory response, and this research shows that alpha pinene may be particularly useful for those with osteoarthritis.

Similar to the THC-laden version found in marajuana, Suver Haze brings an aroma of black peppers and sweet fruits, and produces thick nugs that are easy and satisfying to tear apart.

Cannabinoids are a group of chemical compounds which help to maintain balance in the body by interacting with a series of receptors throughout our nervous systems known as the endocannabinoid system.

The endocannabinoid system is responsible for managing mood, stress, pain and appetite, and cannabinoids can be used to make their effects stronger.

Moreover, studies such as this case report have indicated that CBD, which is the most common cannabinoid, has been effective in assisting individuals in getting off weed.

Meanwhile, this study demonstrated that CBD can effectively assist in psychological symptoms of cannabis withdrawal syndrome (CWS) by regulating the neurotransmitters which are associated with addictive behaviors.

Basically, cannabinoids are great for helping curb withdrawal symptoms from weed by easing stress and anxiety, improving sleep, and optimizing a healthy mindset.

While cannabinoids certainly do a lot of the heavy lifting in hemp flower, terpenes still play a large role in making hemp flower feel so familiar to those who have had cannabis.

Terpenes are a large group of compounds found in plant matter, and are valued not only for their aromatic properties, but also for their therapeutic qualities.

Beta myrcene, for instance, is associated with hoppy, malty aromas, and tends to give the users a sedative effect, especially when taken in high doses.

Limonene, on the other hand, provides that classic clean lemon scent, and is notable for the ways in which it can uplift a user’s mood and ease anxiety.

Not only will the terpenes in hemp flower provide users with such benefits as these, but they also supply hemp flower buds with an aroma, flavor and appearance that’s incredibly close to cannabis.

Whatever your motivation may be, quitting weed is a completely doable endeavor, and while symptoms of cannabis withdrawal syndrome can be irritating, hemp flower can help you along your journey by providing a viable alternative.

Hemp flower is not considered an addictive or habit-forming substance; it appeal lies in the way it can relieve pain and anxiety.

How is hemp flower different from marajuana?

Hemp and marajuana may be closely related, but their main difference is that because of its lack of THC, it won’t get you high.