We all know that smoking is a damaging habit with many negative long-term effects, but it’s notoriously tough to shake. It’s never too late to qui, and many individuals have found success in using hemp flower to quit tobacco.

Gum, patches, medical assistance and prescriptive medication have been known to work as viable options for quitting tobacco, but most recently, some are finding cannabis to help take the curb off.

Cannabis can indeed be used as a way to help you on your path to breaking free of your addiction: it’s relaxing, poses many benefits to the user, and can give you the familiar feeling to the tobacco products one is used to.

However, some people do not want or respond well to the mind altering effects caused by cannabis.

For these individuals, hemp flower possess an excellent option.

Hemp flower is highly similar to cannabis, save for one exception: it does not contain enough of the psychoactive component THC to create the high associated with cannabis.

That being said, hemp flower does contain all of the other therapeutic components: namely cannabinoids and terpenes. These chemical components possess properties which may make hemp flower for quitting smoking a viable option. 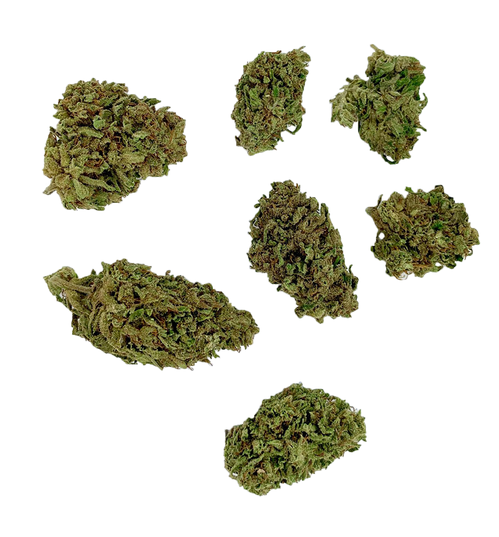 Blue Genius is a special breed of hemp flower with an impressive amount of CBD for those who are still growing accustomed to this beneficial plant, and CBD is especially useful for those trying to quit cigarette smoking.

As a hybrid, this strain won’t make you feel jittery or drowsy. Plus, it contains .06% humulene, which is a known appetite suppressant, and the effect may help you cope with the appetite changes that often come with quitting smoking.

Blue Genius also contains the terpene phytol. Phytol is produced when the chlorophyll in plants’ leaves decompose, and is known to possess both anti-inflammatory and antinociceptive effects.

Anti-nociceptive effects are beneficial because nociceptive pain is the most widely-teaching type of physical pain in the human body, and occurs by way of its receptors detecting any potential threats, like a bacterial infection or injury.

Because nociceptive pain has such a vast broadcast, it makes phytol an all the more important terpene for relieving a variety of pain, such as the migraines which often come with quitting tobacco. Plus, it can relieve muscle tension and stress, and can help you manage your anger.

These dense buds produce lovely green leaves with pistils the color of nectarines and a delicate blanket of trichomes. The small to medium size variety also makes these buds perfect for popping into the grinder.

When you do break this baby down, this strain reveals an aroma of cloves, spices and tropical fruit when broken down, along with hints of creamy, earthy sweetness. 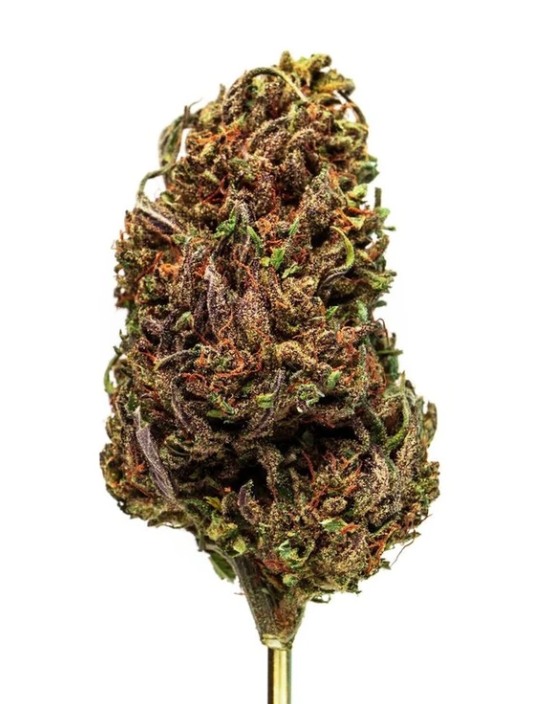 If quitting tobacco’s been making it more difficult to get back out there with your friends, try this truly uplifting treat.

Sour Space Candy is a classic sativa dominant strain that’s great for enjoying before going out, while offering protection against headaches and irritability, which could otherwise tempt you into falling off the wagon.

One of these terpenes in particular is beta myrcene, which, in addition to working well as an excellent pain suppressant and, in some cases, a mild sedative, beta myrcene can also help relieve stress, albeit to a certain extent.

This 2002 animal study, for instance, showed that hemp flower can relieve muscle tension while improving sleep quality, which could be extremely helpful for those who experience impaired sleep from tobacco withdrawals.

Sour Space Candy is also high in the terpene known as beta caryophyllene, which is known for the phenomenal way in which it can almost shut down neuropathic pain while also relieving symptoms of stress and depression.

Buds produced from Blue Ridge Hemp’s spin on this classic strain creates medium to large buds with leaves in a deep shade of green, along with deep violet tendrils.

This strain presents that lemongrass and sour diesel flavor that Sour Space Candy is known for, with that perfect sweet and sour taste. 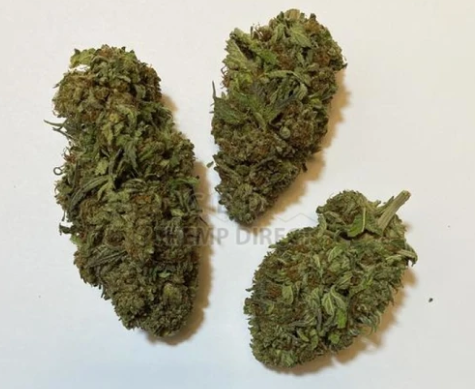 This high CBD, terpene powerhouse of a strain is just the thing for those who aren’t about to let quitting tobacco ruin their day.

Besides combat both drowsiness and chronic pain, this sativa dominant strain is also ideal for counteracting the effects of depression, stress and anger, and as a sativa-dominant strain, while keeping you awake and alert without leaving you wired.

While this strain is low in THC, it is quite high in CBD, so you never have to worry about it making you groggy–this also makes the strain ideal for those who find themselves particularly susceptible to THC. Plus, it is filled with terpenes that promote relaxation, such as beta-caryophyllene.

This exclusive strain from CBD Hemp Direct is grown organically on Paradise road near the Las Vegas strip with the utmost care, and produces springy, slightly long buds that can vary in size from medium to large, and features a dank aroma featuring a bit of musk.

Moreover, Paradise OG is especially concentrated in sleep-promoting myrcene, which acts as a mild sedative, as well as humulene, which is extremely popular for providing inflammation and stress relief. In this study, it was shown that humulene’s anti-inflammatory, preventive properties can help with autoimmune symptoms.

Plus, humulene is known for its appetite-suppressing properties, meaning that it can help stabilize the ways in which tobacco withdrawal affects your appetite.

If you find that your withdrawal symptoms are often catalyzed by stress, consider using this strain to help you unwind and re-establish balance.

Mr. Hemp Flower is known for producing strains especially high in CBD, and at 24%, this crowd favorite is no exception.

This strain also holds potential especially for those with insomnia, anxiety and pain, which means that it’s great for those with symptoms of narcotic or tobacco withdrawal.

It goes without saying, then, that this strain is incredibly relaxing.

One of the more abundant terpenes in this strain is alpha-pinene at .05%, which is not only a powerful anti-inflammatory agent, but also works as a broad-spectrum antibiotic.

One terpene found in this strain is alpha-pinene, which makes a strain particularly useful for those who find themselves to be highly THC-sensitive, since alpha-pinene can help counteract the anxiety sometimes caused by it.

Of course, this strain is also high in beta myrcene, which always makes a notable appearance, and a few animal studies have suggested that high doses of beta-myrcene may produce muscle-relaxing effects.

Additionally, Suzy Q is also high in limonene and linalool, which, among other functions, are notoriously known for soothing the muscles while relieving tension.

Finally, Suzy Q is especially high in beta-myrcene, which, at .26%, renders this strain as sativa dominant. This terpene characteristic signifies that the strain won’t make the user drowsy, but will certainly provide relaxing effects. That being said, you should have no problem sleeping if you take this hemp flower in the evening.

Suzy Q produces buds which present an earthy shade of green, with an even distribution of amber-colored tendrils. When smoked or vaped, this nug gives off a light, piney aroma, which is a great pre-bedtime treat. 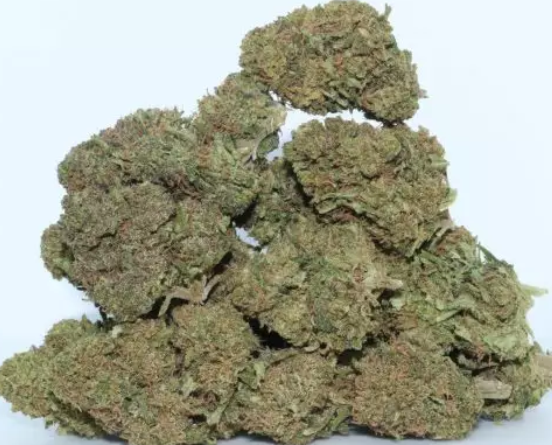 If you find that your nicotine withdrawals are leading to symptoms of depression and/or impaired sleep, this indica dominant strain may do the trick.

A particularly dominant terpene in this strain is beta myrcene, which is known for acting as a sedative and sleep aid, and in indica dominant strains like these, the myrcene is sure to help you get to sleep a lot faster.

Beta myrcene also performs exceptionally well against inflammation and oxidative stress, plus it also helps to regulate the terpenes and cannabinoids by reducing the selectivity of the blood-brain barrier, so that it allows the permeability of compounds like CBD and THC to travel more quickly and efficiently while delivering greater effects.

This strain is also abundant in beta caryophyllene and alpha pinene, and it’s great for alleviating anxiety, soothing inflammation, and for helping the regulation of mania and depression

Cherry Abacus grows springy, dense buds which is a trait inherited from the Abacus, strain in its genetics, while featuring shades of violet and gold with a sticky texture that indicates this strain’s high resin content.

This strain also contains .6% beta-caryophyllene, which is considered an MVP of sorts among anti-inflammatory terpenes: not only do its anti-inflammatory properties reduce pain, but it can also protect the brain from damage caused by inflammation.

While the aroma of astringent berry is subtle, the dankness really stands out whether you vaporize or smoke it. This high CBD, low THC strain is fast acting and potent, and is perfect if you need something to ease your mood quickly.

Cannabinoids are a group of over a hundred chemical compounds found in hemp flower, and are distinguished chiefly by the unique way in which they interact with the human body.

When we inhale, ingest, or topically apply cannabinoids, they are absorbed and transferred by a series of receptors throughout our nervous system known as the endocannabinoid system.

Additionally, studies have shown that cannabinoids such as CBD may even help users quit a tobacco addiction.

For instance, one 2013 study demonstrated that the use of CBD alone was able to decrease cigarette consumption in subjects with a reliance on tobacco, while another study from 2018 showed that CBD was able to help smokers quit tobacco because it helped reverse the attentional bias to cigarette cues when going through withdrawal.

Hemp flower also contains a variety of terpenes, which are known for their therapeutic properties when it comes to stress and inflammation. On top of that, terpenes are what give hemp flower their aromatic qualities.Terpenes are also important in hemp flower, because when combined with cannabinoids, it creates a synergistic connection known as the entourage effect, which can amplify hemp flower’s overall effects.

That being said, hemp flower is great for creating the entourage effect because it naturally already has all the necessary terpenes and cannabinoids.

As it can provide users with a sense of calm and relax their psychoses without building an addiction, hemp flower can empower countless individuals to finally quit their tobacco addiction.

While a bad habit is always tough to crack, keep in mind that cigarette smoking isn’t just bad because of the tobacco–it’s also because inhaling the smoke of burning plant matter simply isn’t good for your lungs.

However, dry vaping allows for inhaling vapors that are at a much lower temperature, and are far more manageable for the lungs.

Ingesting hemp flower as edibles for quitting tobacco is also an excellent method; while it will take longer to achieve the effects, some of the especially therapeutic terpenes may absorb more efficiently.

Yes, hemp flower is a legal substance that provides a wealth of therapeutic benefits, and studies indicate that the cannabinoids in hemp flower can help quit a tobacco addiction.

How does hemp flower help me quit tobacco?

It remains unknown exactly how cannabinoids in hemp flower help quit tobacco, though it may have much to do with their restorative properties when it comes to the nervous system. Meanwhile, several blind studies have shown promising results regarding this phenomenon.