Inflammatory bowel disease, or IBD, is a term encompassing disorders that inflict the digestive tract with inflammation, and generally refers to Crohn’s disease and ulcerative colitis.

In the case of Crohn’s disease mainly involves inflammation of the lining in the digestive tract, while ulcerative colitis is associated with ulcers on the innermost lining of the large intestine and rectum.

It still remains unknown what causes inflammatory bowel disorder among individuals, though it’s been theorized that it may be triggered by an autoimmune response. Therefore, it’s typically treated with immune suppressors, anti-inflammatory drugs, and antibiotics.

Additionally, patients with inflammatory bowel disease may benefit from another unique treatment: hemp flower may be used to reduce inflammation and improve immune response functions. This is largely because it contains two special kinds of organic compounds known as cannabinoids and terpenes, which come in a variety of types, and they all have therapeutic qualities.

We’ll go over how cannabinoids and terpenes work, but first, we’ll list some of our favorite strains of hemp flower for IBD. 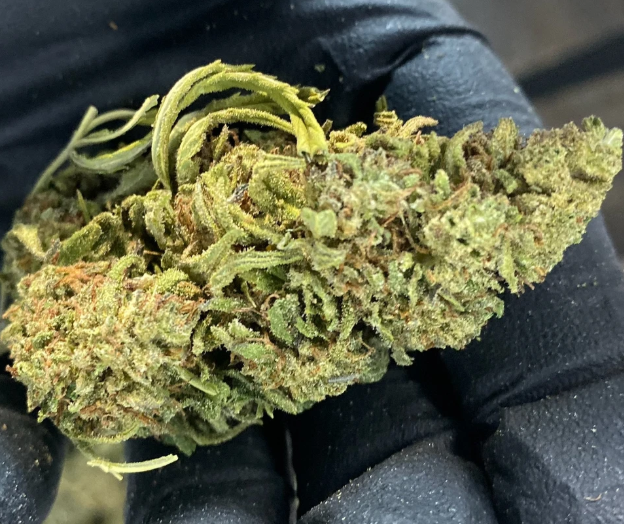 If you love Cherry Wine, you will adore this indica-dominant hybrid.

The density of these buds ranges from medium to high, but the large size of them is surprisingly consistent with each flower.

The most abundant terpene in Cherry Soda is beta myrcene, which is not uncommon in many hemp flower strains.

Myrcene is a powerful sleep aid, and plays a large role in determining whether a strain is indica or sativa dominant.

Additionally, beta myrcene is known for its analgesic effects, and relieves inflammation by acting as a sedative. Moreover, one study showed that beta myrcene can inhibit the development of ulcers, which make it potentially beneficial for individuals with Crohn’s disease.

Another terpene that is particularly high in Cherry Soda is geranyl acetate, which can give hemp a floral, fruity scent. However, geranyl acetate is especially known for its ability to kill bacteria, as it was observed in this 2011 study to display high microbial properties, which can help prevent triggering and inflammatory bowel flare-up.

Cherry Soda is also high in neryl acetate, which is useful not only for relieving inflammation, but also for its potential anti-aging properties.

The shade of green in this strain is unusually bright for an indica, with pistils bearing an almost identical shade of sage green, with a mild sprinkling of trichomes.

When left unbroken, the smell profile of this strain is slightly sweet, but reveals pinched, gassy notes when these nugs are broken down. 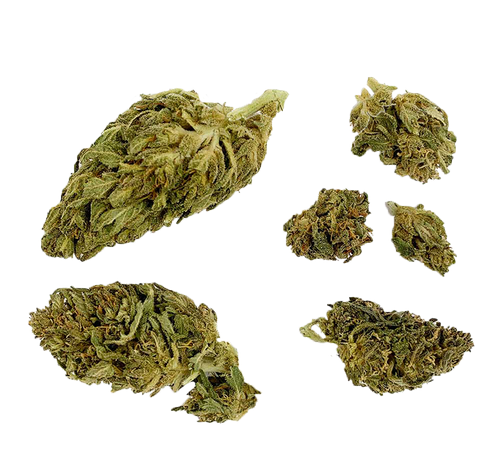 Ever so slightly on the sativa dominant side, Lifter will neither make you feel drowsy or overcharged, so you don’t need to worry about it giving you the jitters.

Lifter is known for the pleasant effect it gives, creating a sense of alertness and slight euphoria, while also providing a sensation of relaxation and peace.

One of the terpenes which helps to promote this sense of calm is alpha pinene, which can also help to improve non-REM sleep. This is great for those who want to keep their blood pressure down, as receiving a sufficient amount of sleep is an important part to a lifestyle that’s beneficial for your heart.

More importantly, though, alpha pinene can curb inflammation by shutting off the inflammatory response triggered by the immune system. Because of this powerful anti-inflammatory function, Lifter can be an excellent source of relief for those with inflammatory bowel disease.

This strain contains a fair amount of beta myrcene, which is typically the terpene responsible for giving strains a hoppy, clove smell. Myrcene is an excellent sedative, and also works extremely well against pain. In one study, it was even shown that myrcene can eliminate pain on a level comparable to aspirin.

This strain is also high in beta caryophyllene, which is a fantastic gastric protectant. Beta caryophyllene has been shown in this study to inhibit gastric mucosal injuries triggered by necrotizing agents.

Featuring dense, resinous buds, this strain is especially distinct for its neat structure and shape. When broken up, Lifter is reminiscent of overripe tropical fruit, astringent berries and sweet gas. 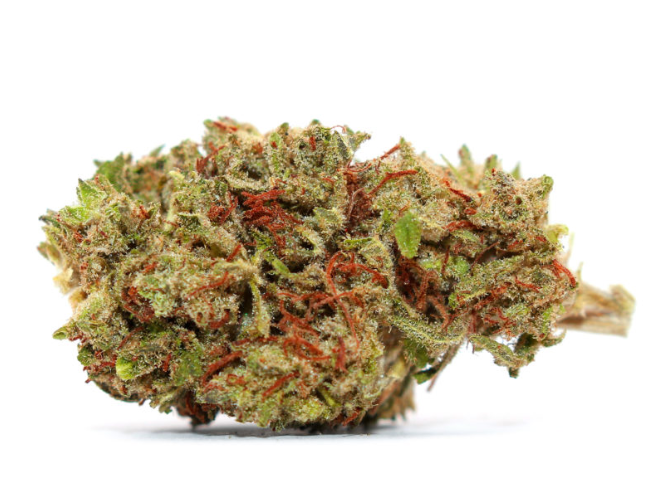 This strain is sweeter than a tropical getaway, and just as relaxing, though the user can still feel social and alert when enjoying it.

If you need a strain that will reduce anxiety and relax your gut, this very slightly sativa-dominant strain is right for you.

One terpene that really shines in Hawaiian Haze is limonene, which is reflected in the lemony notes of the flavor profile. This strain is also prevalent in citrus rinds, and can provide a number of health benefits to those who use this strain.

Limonene works not only as an antidepressant and stress-reducing agent, but also provides inflammatory benefits that can especially benefit gastrointestinal issues. Several studies such as this one indicates that the limonene in essential oil has the anti-inflammatory potential to act as a standalone medication for gastrointestinal disorders.

Hawaiian Haze is also high in linalool, which possesses sedative-like qualities, which allow the user to feel significantly less pain. Linalool can also act as an anticonvulsant, and can eliminate some of the most widespread forms of pain throughout the body.

Mr. Hemp Flower’s special little strain produces a crop that’s not just therapeutic, but has a stunning appearance: the nugs are small and airy, with an extremely bouncy texture, and vibrant orange-red pistils form a vivid image against the bud’s pale green leaves. When broken into, these nugs release an aroma of grassy pine and sour lemon. 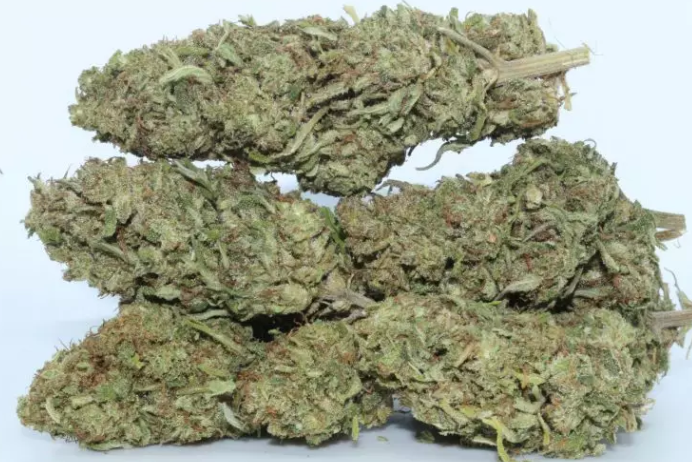 If you need a little treat to curb gastric inflammation and feel relaxed, try this otherworldly strain. Sour Space Candy is known for promoting relaxation, curbing pain and improving mood.

Sour Space Candy is descended from Sour Tsunami, and like its progeny, it exudes a flavor one might associate with sour, chem and OG lines.

The dominant terpene in this strain is myrcene, which effectively reduces inflammation while acting as a sedative. In larger amounts, myrcene can turn a strain of hemp flower into an effective sleep aid, though it’s not quite high enough in this case.

Nonetheless, Sour Space Candy uses myrcene to promote a sense of relaxation in the body and mind.

Meanwhile, there is a lot of beta-pinene in this strain, which is known to give strains a smell reminiscent of pine forests, and acts as a solid source of anti-inflammatory pain.

Sour Space Candy is also high in terpinolene, which provides an astringent burn to smoke. Interestingly, this terpene is one of the few that does not alleviate inflammation or pain, but instead promotes relaxation and, in larger doses, sleep.

Sour Space Candy is also high in the anti-stress limonene and linalool, which are popular in both cannabis and hemp strains.  Linalool is popular for anxiety and pain, and helps reduce inflammation and improve your rest quality for a smooth recovery. Meanwhile, limonene can help improve mood, alleviate stress, and reduce inflammation. Limonene can also stimulate your immune system, better protecting yourself from getting sick, thanks to its wealth of antioxidants. 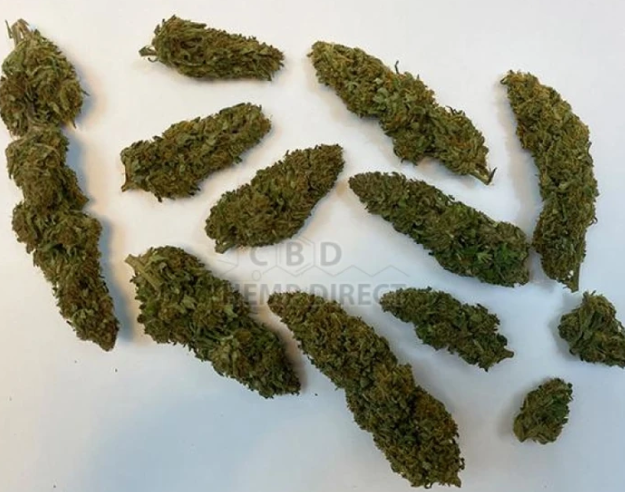 If you’re a fan of Hawaiian or Honolulu Haze, you are sure to love this strain, which was bred from Hawaiian Haze.

This strain is much lower in CBD, but you’ll nonetheless experience pain relief. This low amount of CBD may actually be quite desirable for some, especially those who find that they tend to experience drowsiness from it.

One of the most abundant terpenes in this strain is, once again, beta myrcene, which can work against inflammation and pain. Hemp World Haze is also high in alpha humulene and beta-caryophyllene, which are historically good together, and are frequently combined with another throughout traditional Chinese medicine.

It’s no coincidence that this occurs, as they balance each other out well. Beta-caryophyllene is superb for gastric protection, while humulene is antibacterial and fights against inflammation both in the gut and, as demonstrated in this Brazilian study, when applied topically to inflammation of the dermal layer.

Meanwhile, alpha-bisabolol also contains a lot of benefits for those with tissue damage in the large intestine. In fact, one study even observed that the use of alpha-bisabolol can promote gastroprotection against acute gastric lesions, making it exceptionally useful for inflammatory bowel disease.

Hemp World Haze creates long buds with an even shade of pine green, with some hints of amber, and present a floral, fruity and dank aroma.

Cannabinoids and IBD In Hemp Flower

Cannabinoids are the group of chemical compounds that CBD and THC belong to. Although hemp flower doesn’t contain enough THC to make the user high, even small amounts can help reduce pain and alleviate inflammation.

In the National Academies of Sciences, Engineering and Medicine, pain management was rated as the most scientifically-supported function of hemp and cannabis, and many IBD patients agree with this conclusion: one study even showed that those who took cannabis for their IBD found relief in their symptoms.

Terpenes, meanwhile, are special organic compounds found in plants. While they are believed to help protect plants from being eaten by animals, they often create pleasing, aromatherapeutic scents.

Terpenes are known for their anti-inflammatory, therapeutic effects, and they can help with gut health, even.

Here are some terpenes especially beneficial for IBD:

Alpha bisabolol provides a delicate, floral aroma found in chamomile, and may play an especially large role in the entourage effect.

This terpene is top 3 in a lot of strains, as it’s a pretty strong anti-inflammatory agent, antioxidant and source of stress relief.

Alpha-pinene is an anti-inflammatory terpene that is not only antibacterial, but also contains anti-nausea properties, and can help stabilize gut function. Alpha pinene is also known to have a sedative effect, which encourages non-REM sleep and can improve memory retention.

This terpene is both antifungal and performs protective functions on the gastric muscles, making it ideal for those with inflammatory conditions of the bowels.

This is largely due to the fact that limonene is known to provide nausea and pain relief while performing soothing functions on the tissue.

Linalool, which is heavily associated with lavender, is known for its soothing benefits and ability to relieve anxiety.

In addition to its anti-stress properties, linalool is also useful for treating inflammation and depression, and also works well as a sleep aid.

Inflammatory bowel disease is a condition that can cause a great deal of unpredictable symptoms, so having control over inflammation whenever possible is a huge deal.

Some control may be attainable with the use of hemp flower, thanks to its anti-inflammatory, antibacterial benefits. When selecting a strain of hemp flower for IBD, stick with reputable brands like Mr. Hemp Flower, Dr. Ganja, CBD Hemp Direct, Tweedle Farms, and Black Tie CBD.

Yes, all hemp products, including hemp flower, are legal, and can be lawfully purchased and sold anywhere in the United States.

Where can I find hemp flower?

As the new legal status of hemp is allowing for both hemp flower and CBD products to become more widespread, the number of dispensaries in the United States are growing. However, the internet may still be the most convenient source of hemp flower in a lot of areas. Whenever you buy hemp flower online, make sure to purchase from reputable brands that don’t make wild claims and offer a certificate of analysis for all of their products.

Can I use hemp flower for IBD?

While you should ultimately consult a healthcare professional on the treatment of diverticulitis, hemp flower may help with symptoms of abdominal pain and nausea, and may also help prevent the diverticula from worsening.