A panic attack is a temporary episode of extreme terror and anxiety, coupled with the individual feeling as though they are losing control, dying, or bound for impending doom. Luckily, using hemp flower for panic attacks might be able to help.

When one has a panic attack, it’s difficult to exaggerate how negatively it can impact their day.

While they’re unpleasant to endure, they are temporary and, in most cases, rarely affect individuals more than just a few times. In cases where individuals repeatedly experience panic attacks, this becomes known as a panic disorder.

While panic attacks are not life threatening, their repeated and unexpected occurrences are frightening, and can greatly impact quality of life.

There are fairly effective treatments available for panic disorder, such as medication and psychotherapy,  although some people may find additional relief in hemp flower.

Hemp flower is the bud that grows from hemp plants, which are closely related to cannabis. Unlike cannabis, though, hemp doesn’t contain as much of the psychoactive cannabinoid, THC.

Instead, hemp flower carries a wealth of other cannabinoids such as CBD and CBG, which can help reduce anxiety and stress while relieving inflammation. Hemp flower also contains terpenes, which provide strains with a fragrant scent while also offering many therapeutic benefits.

Before we go over cannabinoids and terpenes, though, let’s discuss some of our recommended strains of hemp flower for panic attacks. 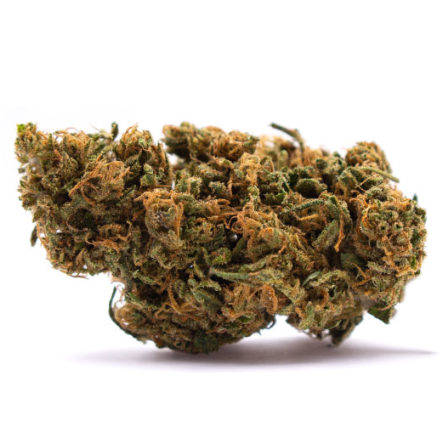 While symptoms of panic and anxiety any time of day, this strain is for those who experience sleep-impairing anxiety at night.

Named after Rocky Bal-Baox himself, this sleep-promoting strain will knock you out in the late rounds, and presents a balanced, yet intense terpene profile, though its dominant terpenes tend to be heavily associated with inflammation and tension.

Like pretty much all of Mr. Hemp Flower’s strains, Baox is high in CBD, containing 18%. This allows the strain to work especially well at relaxing the body, as one large case series shows that CBD may hold benefit for anxiety-related disorders regarding sleep.

Additionally, Baox works as a terpene powerhouse, with a unique balance held between several terpenes that induce relaxation and improve sleep quality.

Limonene is known for giving off a lovely lemony scent, and works well at soothing anxiety. Studies have shown that whether inhaled or orally ingested, limonene can reduce symptoms of stress, depression and anxiety, as well as such similar symptoms found in obsessive compulsive disorder (OCD).

This also couples well with linalool, which is known for its sedative effects that are both pain-relieving as well as relaxing. This can occur because linalool raises the levels of adenosine in the body, which is often blocked by stimulants or stress.

Mr. Hemp Flower partnered with a local Asheville, NC farmer to grow this strain outdoors, and under the most nurturing care, Baox has grown to produce light, crispy buds with a very slight cone shape, highlighted with vibrant streaks of amber. 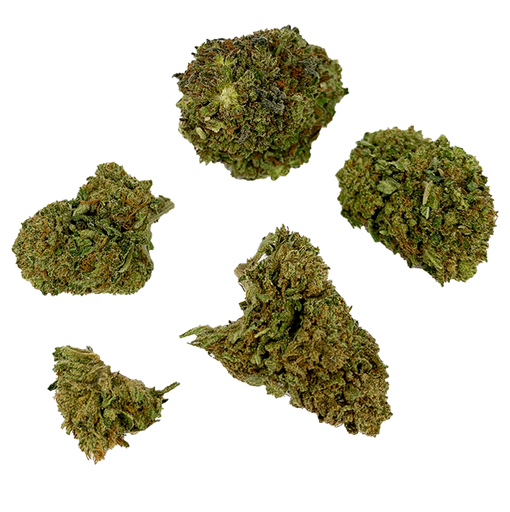 This is one of those versatile strains that will only relax as much as you want it to. Do you want to reduce anxiety and continue to enjoy your evening? Bubba Kush x Harley will keep the symptoms at bay so you can keep carrying on. You want to have a peaceful night’s sleep? Smoke it just before bedtime, and it’ll be lights out in no time.

While high in CBD, this strain of hemp flower is also high in beta myrcene.

Beta myrcene is great for anxiety because it works as both a sedative and anti-inflammatory agent. This study showed that among the terpenes found in hemp and cannabis, beta myrcene is instrumental in not only its sedative and analgesic properties, but also through the synergy it displays with the cannabinoids.

The only other terpene in this strain that’s nearly as high as beta myrcene is beta caryophyllene, which is not only great for alleviating pain, but also for easing anxiety. In this study, it was shown that beta caryophyllene can reduce anxiety symptoms by targeting the CB2 receptors.

Additionally, limonene provides a citrusy taste and uplifting, soothing benefits along with alpha pinene, which offers a clean, woodsy flavor.

This indica-dominant hybrid is closely related to Kush Hemp, and like its relative, it’s known for its incredible density.

When left unopened, Bubba Kush X Harley B exudes an aroma of spices, skunk and gas. Once broken into, though, it reveals an aroma of caramel, pine, sharp citrus, fuel, and just a bit of astringent grape.

If you’re going through a stressful period, whether it’s a new project or moving house, Juicy Fruit will help keep you calm, relaxed and smiling.

The most dominant terpene in this strain is beta caryophyllene, which is great for both relieving pain and reducing anxiety by targeting the CB2 receptors, which makes it very similar to cannabinoids when it comes to stress relief.

This tasty strain is also high in alpha-humulene, which is excellent for relaxing muscles through its anti-inflammatory properties, which are observed in this 2009 study.

Juicy Fruit also contains a large amount of guaiol, which displays antioxidant and anti-inflammatory benefits, as well as beta myrcene, which is both a sedative and analgesic aid.

The nugs grown from Juicy Fruit have a slight variation in both shape and size. The buds produce leaves of an earthy shade of green, and warm brown pistils.

When you grind up these nugs, they release an aroma of refreshing citrus and ripe tropical fruit.

Juicy Fruit was released last year for its second season as a crowd favorite, and hopefully we’ll see it renew for a third. Until then, the current harvest is still available!

Here’s another indica and sativa cross that will curb your anxiety and get you through the day: Esmeralda’s Glory from Medhemporium is a gorgeous strain that will reduce stress without making you feel drowsy. Plus, it’s great for those with chronic pain.

One terpene particularly worth mentioning in this strain is alpha farnesene, which is known for giving strains a crisp, tart flavor that’s close to green apples.

More importantly, though, alpha farnesene has both anti-anxiety and antispasmodic properties. Alpha farnesene is also known for its sedative properties, and is often seen with indica dominant strains.

Additionally, this strain contains .128% trans-caryophyllene, which may be able to protect the brain from inflammation, as shown in this study.

Esmeralda’s Glory also contains a fair amount of limonene, which is known for both its soothing and uplifting, elevating properties. Studies have shown that limonene can help with a variety of anxiety disorders, such as obsessive compulsive disorder and panic disorder. That being said, the flower from this hemp strain may be able to reduce the anxiety that often builds up in individuals with panic disorder.

The buds produced by Esmeralda’s Glory are truly something to behold: featuring leaves the shade of emerald green, with the occasional hue of the deepest purple. The flavor is maple and piney, with subtle notes of floral and pine on the exhale.

As far as effects go, this strain has been praised for the way it seems to quickly interact with the endocannabinoid system, leaving the reader with instant anxiety relief. 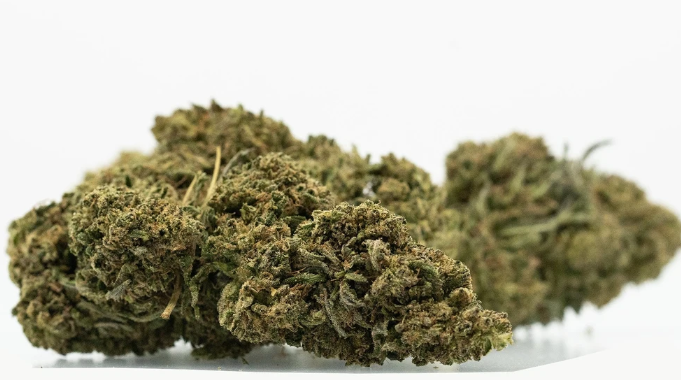 Key Lime Pie was bred from a phenotype of Girl Scout Cookies, and is the perfect dessert for either getting you through the day, or relaxing in the evening.

This is a sativa-dominant hybrid, but it won’t leave you with any jitters or overexcitability. It’s also roughly 15% CBD, which is enough to provide a sense of calm, but not quite enough to give off a drowsy effect.

Key Lime Pie also contains .12% beta pinene, along with linalool, has been shown to exert antidepressant properties as shown in this study, while also relieving anxiety and inflammation.

Besides beta myrcene and alpha pinene, which both pose sedative, anxiety-relieving effects, Key Lime Pie also contains .10% alpha humulene, which acts as an anti-inflammatory and analgesic aid, while presenting the potential to work as well as some steroid alternatives when it comes to pain relief.

Black Tie CBD has created a strain with vibrant nugs, exhibiting leaves in hues of vibrant green, while exuding an aroma of lemon, lime and citrus.

When broken down, though, Key Lime Pie releases an aroma of fruity, slightly sour fruit, making it similar to Sour Space Candy, although this one is probably more relaxing.

True to its name, hemp flower is the flowering bud produced from female hemp plants. These buds are filled with a broad assortment of cannabinoids and terpenes, although it doesn’t contain as much THC as cannabis does.

THC is the chemical component responsible for the rush of euphoria, or “high” that cannabis is known for. So while you won’t be experiencing this kind of effect from hemp flower, you will still benefit from the other cannabinoids it contains, especially CBD. Plus, you’ll benefit from terpenes, which are known in other plants for their therapeutic, aromatic properties.

Cannabinoids are a group of organic compounds that interact with the receptors in our body that help regulate stress, mood, and inflammation. While cannabinoids make up a pretty large group, the two cannabinoids mentioned the most are cannabidiol (CBD), which is the most abundant cannabinoid in hemp flower.

CBD is especially regarded for the way it reduces inflammation, so most of the research and use of CBD surrounds inflammatory conditions like anxiety, inflammation and insomnia. However, CBD is also a known agent for decreasing stress and promoting relaxation, and it may be used against panic disorder.

For instance, this extensive study regarding CBD’s effects on those with panic disorder concludes that CBD shows promising signs that it can be used to curb panic attacks.

Meanwhile, there is research suggesting that cannabinoids like CBD can be used for other anxiety and panic-related disorders such as social anxiety, obsessive compulsive disorder (OCD), and post-traumatic stress disorder (PTSD).

Additionally, terpenes may also play a large role in easing panic and anxiety-related symptoms. One study observed that terpenes are useful on their own for eliminating stress, while also pointing out then when they are present with all of the cannabinoids in hemp, they create a synergistic connection known as the entourage effect.

Moreover, terpenes make a great impact on the way a hemp flower strain smells, looks, and tastes, as well as how it affects the user.

For instance, strains higher in the terpene beta myrcene may make the user drowsy while providing a malty, hoppy aroma, whereas limonene gives a strain a lemony, diesel smell, and often creates an uplifting, calming effect.

While research concerning CBD and panic disorder is still in its infancy, anecdotal evidence and the known benefits imply that hemp flower may help reduce the symptoms of stress that come with panic and anxiety disorders.

While hemp flower is a legal substance with relatively few side-effects, those with severe cases of panic disorder should always discuss with their physician before introducing hemp flower to their daily regimen.

How do I find quality hemp flower for panic attacks?

Hemp flower has become more widely attainable in the US, since it’s now legal in all 50 states. In some places, however, the internet may still be the best option as a source. To assure the quality of your hemp flower, always shop from brands that are reputable and reliable. Such brands will be recognized for their lack of claims, straightforward listed dosages of CBD and THC, and a certificate of analysis from an independent lab.

What hemp flower products should I use for panic attacks?

You can enjoy the benefits of hemp through CBD products like tinctures and topical creams, but consuming whole hemp flower is the best way to enjoy all of its benefits and experience the entourage effect.

You can administer hemp flower by smoking it as a hand-rolled or pre-rolled joint, inhaling vapors, or by baking it into edibles, like brownies, cakes or cookies.